Winter has slipped away and spring has arrived (if by date and not necessarily weather). With the arrival of spring comes all the jobs that go along with it. The last week or so has been spent readying the new fabric topped building for shearing. Today I will be sorting the sheep into black and white coloured fleece so that we can keep the wool separate when it is packed and sold. The forecast is for a chance of snow, so we will try to get as many sheep as we can under cover to make sure they are dry; wet sheep are hard to shear and the fleece cannot be packed wet.

I’ll also be making sure all the animals have sufficient feed to last through tomorrow, with a full day of shearing there is little time to feed other than what is necessary.

Our first calf arrived yesterday (other than the 4 resulting from a bull escape), and with the forecast for temperatures dropping to -20°C this weekend, it looks like the busy season has arrived.

The weather has been unseasonably warm and the snow is all but gone again. We are feeding all the livestock, but I have been surprised by the amount of grazing they are doing. While some of the pastures have some stockpiled grass, others have little because of the dry growing season. The amount or quality doesn’t seem to deter the animals however. They seem to be eating only the best hay and leaving everything else, preferring instead to move around the pasture and pick at the dormant grass. 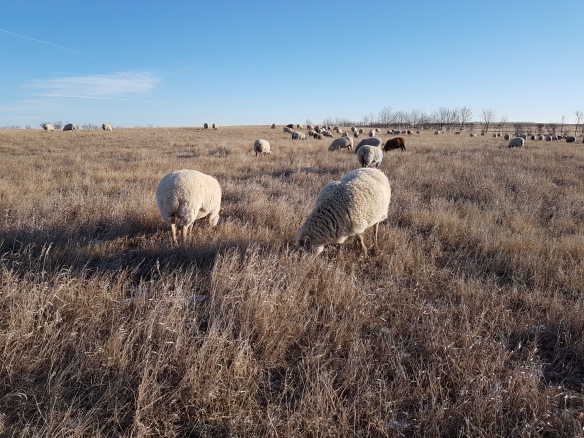 Watching this makes me wonder what it is that urges the animals to do this. They could easily get their fill by staying at the hay, so it is unlikely hunger that moves them on. It may be that these dormant grasses are quite tasty, or it may be some inherent desire that makes grazing animals want to graze. They have evolved to do just that, so it maybe should not come as a surprise that they prefer it, and feel content to fill a good portion of their time by moving across the land in search of feed. I also have to wonder if animals which are not given the opportunity to graze have the desire to do so, even if they are given ample feed. 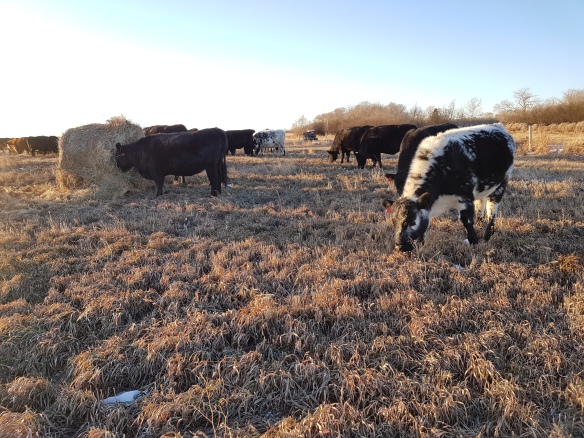 On the other side of this is the grass. I have rarely worried about winter grazing, and usually encourage the animals to do so, but this year, with some pastures having very little late season growth, I worry that we are taking too much of the grass and may impact the growth next year, particularly if we have a dry spring. I will be moving the sheep off one particular pasture soon, and try to balance the health of the pasture with the animals which rely on it.

Another month has nearly passed. The calves are weaned and settled into their winter quarters and the cows and sheep are bale grazing in their perspective pastures. The first batch of pigs has gone for slaughter, and the rest have moved into the straw filled shed. Winter routines are starting to take hold.

Also this month, another pup (herding dog this time) has arrived. Tess is a Kelpie x Border Collie and is about 4 months old now. She is a fairly mellow pup, and seems to be quick to learn.

We are also thrilled to welcome another family member, with my sister and brother in law having another daughter. It will be exciting to watch her grow and change over the next few months and years.

We had hoped to continue to use some fall regrowth to stretch our grazing season and to prevent getting into our winter feed, but mother nature had other plans. A considerable amount of snow fell this week, and while we are glad to see the moisture, it is making grazing difficult for the animals. Sheep are quite efficient at grazing through snow and will paw it away to reach the green growth, while cattle use their nose to push into the snow or grab onto the tops of the grass and pull it out.

Sheep grazing. You can see the ewe on the left is pawing the snow away.

After this blast of snow, I was unsure the sheep would be able to get enough by grazing, as their pasture did not have large amounts of tall grass. The other day I took them a couple bales of hay, and they quite quickly ate them all up. That solidified my decision to bring them closer to the yard where they are easier to feed. This afternoon, I set out to move them.

First I spread some hay in their new pasture, then proceeded to go collect the sheep. The few bales I had taken them previously reminded them about being fed, so when I arrived in the pasture, it only took a few moments for them to start to move towards the tractor. They began to follow, until I reached the space where I had taken down the electric wire. They knew exactly where that fence had been, and it took a few moments for them to determine it was safe to cross.

The ewes are just deciding whether to cross the invisible line

Once the first ewes cross over the place where the fence was, the rest quickly follow.

While most stick to the tracks, occasionally one ewe branches off the path

We headed across another piece between their old pasture and new one. I wasn’t sure if they would want to explore this pasture, but they were mostly content to see where I was taking them. 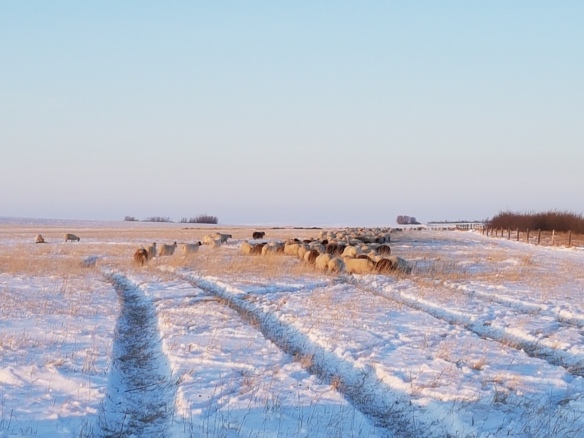 As we reached the hay, the ewes ran past to their feed, although as I followed, I still saw some sheep nibbling at the grass uncovered in the tracks.

And while the sheep are happy to have feed, the dogs like hay for other reasons.

Winter is making an early appearance this year. In a matter of a day, temperatures have sunk below zero and we have snow on the ground. The first sight of winter always means a rush to do the last minute preparations and brings with it a change in what must be done each day, as making sure animals have access to feed and water becomes paramount. But winter also brings with it a quietness and restfulness. The days are shorter, meaning any outdoor work happens within those fewer hours of daylight, and some jobs are just no longer doable. This relieves the pressure to get those jobs done, and after a busy fall, it feels time for a rest.